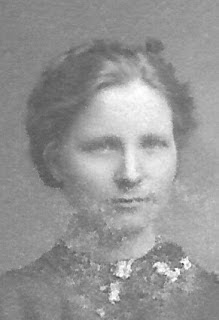 My middle name Lydia derives from two Lydias in my family tree, maternal and paternal branches. I blogged about Lydia #1, the maternal link, here.

The woman in this picture is Lydia #2, my father's mother. The photo was taken in 1910 in Lapua, Finland, shortly before she immigrated from Finland to North America.

Unlike Lydia #1, who lived and died long before my lifetime, Lydia #2 was living in Duluth, Minnesota, when I was 21 and longing to look up my father's side of the family, none of whom I'd ever met - including my father. My week-long visit there with my grandfather and her was our only time together and the memories are sweet. When I take myself back to the hours in their apartment overlooking Lake Superior that summer I see now what I didn't acknowledge then: that I was a treasure to them and it was the fulfillment of a dream for me to be there. The soundtrack of our time together would be . . . silence. They were quiet people, old Finn immigrants who both became U.S. citizens but preferred to communicate in Finnish rather than broken English. Since I didn't and don't speak Finnish we did a lot of sitting together. It's amazing how much I could collect from them by sitting quietly with them and looking out the window at the great lake, or by sipping coffee from the saucer Finn-style with a slurp of the lip and a twinkle in the eye, or by honoring age and the need for an afternoon nap and in so doing having my silent grandmother cover me with a sweet-smelling afghan on the sofa as I looked over at my grandfather sleeping in his chair. These are the tangibles I can tell.

I know a little more about her from what my brothers, nephews, and cousin have shared. Lydia and my grandfather both came from Finland to the United States by way of Canada. I have some postcards addressed to Lydia at Crean Hill, Ontario, Canada, and there is a photo of her that indicates on the back that it was taken at Crean Hill.

In 1913, before her marriage to Richard in Duluth he wrote a four-page letter to her, in Finnish, that I would adore having transcribed. It undoubtedly was a part of their courtship, and meaningful to her for she kept it. Postmarked with two one-cent stamps from Duluth, it is addressed to Miss Lily Maki at Sawyer, Minn. Maki, a shortened version of her last name, is on other photos and Lily appears to be an endearing nickname he called her. Sawyer, Minnesota, located within the Fond du Lac Indian Reservation, is 31 miles from Duluth --where they lived for the rest of their lives. As Fond du Lac Indian Reservation was established by treaty in 1854, Sawyer was associated with it in 1913 when Lydia was there. I wish I knew what led her to both Sawyer and earlier to Crean Hill in Canada prior to settling in Duluth.

Lydia found her way to Duluth and was serving tables in the dining room of the upper-crust gentleman's club downtown. Richard, a shipyard worker all his life, saw her in the window from the sidewalk and pursued her afterward. They married and later raised first-generation Americans: a daughter, Helen, and my father, Eino.

They were industrious, hard-working, and frugal people who never took a handout, not even during the Great Depression. During the depression Lydia planted a garden near a remote lake where Richard often fished, and they got by with some to share. My two older brothers, Richard and Tony (my mother was not their mother) still fish at the same lake in summer!

I don't know why my Finnish grandparents immigrated to the U.S. via Canada rather than coming through Ellis Island. While blogging about Lydia I became curious to know more about Crean Hill, Ontario, Canada. A quick Google search informed me that Crean Hill is now a ghost town. Some fascinating but scant information about this place that Lydia knew can be viewed at:
Crean Hill - Ghost Town.

Interesting and atmospheric story Lydia! Very nice post, brought into mind a song my grandmom's mom (1900-1999) used to sing to me when I was little...a song by a Mr. P.J Hannikainen (1854-1924). Unfortunately I had trouble finding a good version of it, but this one is decent:
http://www.youtube.com/watch?v=iHIjTvUNm2M

Maybe even you might have heard it playing somewhere in the background? :)
-JT

What an interesting story of a family! Do you resemble one of your grandmothers?

I found something on Wikipedia about Finglish. Some of the words made me smile:

Interesting story.....my family history remains to be unseen, I know names of people, but not much else.

JT,
Thank you so much for the link to that song. It's beautiful and I wish I knew what the words mean in English. Since I wasn't raised around the Finnish side of my family I am learning more from you and your blog about Finland than I've known.
Lydia

Francessa,
The Finglish information was totally new to me! Thank you for finding that! I'll pass it on to my family.
As far as resemblances, I don't see any to the maternal great-grandmother, but that picture is small and all I have. Speaking of small, I notice that both the Lydias have small hands - and I inherited them. I find spots of myself in both of them, but mostly in my maternal grandmother (whose picture I haven't shared yet on m blog).
Lydia

Wanderer,
I've had an easier time than you would have researching these things because of the papers/pictures/passed-down stories in my possession. I've heard that the LDS church maintains an enormous database that it shares with the world at large - but haven't looked more online. One very interesting site is the amazing database at the Ellis Island website where you can key in names only and possibly come up with information that links to you. It's at http://www.ellisislandimmigrants.org/
Lydia

Hi! If you want help with translating the letter or other post, please send me email - I will gladly help you! I've also done a lot of research on ancestry for Americans with Finnish roots, and if you want, I can try to find more information on your grandparents' families in Finland, too.
Leena