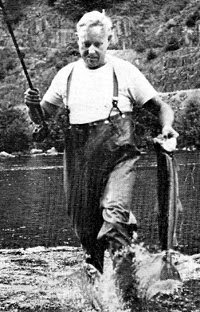 "This activist loves Oregon more than he loves life. I know I can't have both very long."


I moved from Nevada to Oregon in 1976 and just missed witnessing first-hand the leadership of former governor Tom McCall. It didn't matter because he was so beloved and huge a figure in Oregon politics that his legacy was fresh and still being written at the time. He was known throughout the country for a comment he made during an interview on CBS News in 1971: Come visit us again and again. This is a state of excitement. But for heaven's sake, don't move here to live. My ex-husband and I had moved to Oregon for him to attend law school, but my mother had lived in Oregon during WWII plus I had cousins living in the state, so I just hoped that Oregonians would detect my connection with and love for this place and forgive me for planning on making the move permanent.

Seven years passed and I was divorced (that song All My Ex's Live in Texas....that applies in my case) and working for a state agency in its lobby office during the legislative session. Tom McCall had lost his battle against cancer and Oregon was mourning losing Tom McCall. His body was to lie in state for public viewing in the rotunda of the State Capitol Building, across the street from the building where I worked. I wanted to be there in the morning before the crowds came to bid McCall farewell -- waiting until my lunch hour would have meant long lines and possibly not having enough time to actually pass by the casket -- so I was uncharacteristically early for work that day. My building was open because it was just after 7:00 a.m., so after offloading my stuff at my desk I walked over to the Capitol in the chilly January air. While climbing the steps to the entrance I noticed a uniformed guard at the door and when I came near he opened it for me, returning back to formal guard stance as soon as I cleared the entry.

Inside the Capitol there was absolute silence. One more solemn guard in uniform was standing at attention about two yards from the open casket that was situated in the center of the rotunda. The body of Governor Tom McCall lay in state there, with the guard and I the only people with him at that moment in timeless time. The soldier's post must have remained stationary for the remainder of the day as a steady line of Oregonians walked slowly by the casket, but for a solitary visitor that early morning he stepped aside a bit further. I then approached the casket, feeling the heavy honor of having privacy to study the governor's face and I whispered to him, "Thank you for Oregon." To understand why I would have said those particular words (I mentioned one of the reasons in my post about Oregon's public beaches), click on links below to learn more about the measure of this man.


On September 26, 2008, a bronze sculpture of Tom McCall will be dedicated at Salem's Riverfront Park. His son, Tad, wrote a commentary published in the Statesman Journal prior to the event, noting that:

. . . this stunning, dynamic sculpture of Tom McCall rises from the banks of the Willamette in Salem's Riverfront Park. Standing even taller than dad's 6'6" frame, the 1,000-pound statue rises 9'6" and recreates in bronze the famous photograph taken by John Daniel Callaghan of Tom McCall wading from the Deschutes with rod and steelhead in hand. The most remarkable part of the scene is the steelhead-in-hand. Frequently, dad returned without the elusive steelhead, but filled with the pleasure and exhaustion of a day on Oregon's many world-class streams.

The magnificent bronze statue speaks to all of us. It dynamically conveys dad's presence. It reminds us what we can do when we are at our best: bestow Oregon's beaches to all Oregonians, balance private rights with common good in land use planning, incentivize reuse through the bottle bill, share with each other in tight times by using our "odd" and "even" license plate numbers to alternate the days we got gas during the gasoline shortage and many more.

[September 26, 2008. UPDATE to this post: See 29 thumbnail photos here of the bronze monument recreated from the famous photograph of Tom McCall shown above. It was this photo that was on the cover of his book, Tom McCall: Maverick, an autobiography written with Steve Neal and published in 1977. Additionally, the Statesman Journal published a front-page article about the monument today.]


Below is a portion of a biographical note from Oregon State Archives about Oregon's maverick. (I cannot resist a comparison between McCall the Maverick and John McCain's claim to the title of Original Maverick, since McCain first appeared on Capitol Hill in 1982, five years after McCall's autobiography was written.)

In 1966 he decided to run for governor, and found he was opposed by his own party. Nevertheless, he ran on the issue of "livability" and defeated Robert Straub in the general election in November 1966. His first major political victory came with legislation known as the "Beach Bill," which granted the state government the power to zone Oregon's beaches, thus protecting them from private development.

In 1969, his belief in the control of development led to a proposal for land-use planning. McCall wanted to broaden Oregon's industrial base, but at the same time insisted on conserving the environment. His proposed legislation (Senate Bill 10) required local governments to complete comprehensive zoning plans within two years.

Perhaps the most famous environmental legislation enacted under McCall was House Bill 1036, the "Bottle Bill," which was the nation's first mandatory bottle-deposit law and was designed to decrease litter in Oregon. The bill was enacted in 1971.

In terms of national issues, McCall was a vocal and steady supporter of the war effort in Vietnam. He was one of the first prominent Republicans to publicly call for President Nixon's resignation due to the Watergate scandal. In late May of 1973, McCall called for voluntary measures to help alleviate concerns over the energy crisis. He also ordered extensive conservation measures to be followed by state agencies, and ordered businesses to shut off outdoor lighting to conserve energy. He also supported an innovative gas rationing plan that used vehicles' license-plate numbers ("odd" or "even") to determine when a person could purchase gasoline. The latter idea gained national attention.

McCall's brilliant quote beside the photo was a late-in-life statement taken from an article you can read fully here.

After McCall's final attempt at the governorship a group launched an initiative to repeal McCall's most lasting legacy, the state's land use planning system, which included the creation of urban growth boundaries. Measure 6 went on the ballot for the 1982 election and McCall vowed to fight it to the end. McCall was dying of cancer and used the final months of his life making sure that Measure 6 did not pass.

During his campaign against Measure 6, McCall said "You all know I have terminal cancer—and I have a lot of it. But what you may not know is that stress induces its spread and induces its activity. Stress may even bring it on. Yet stress is the fuel of the activist. This activist loves Oregon more than he loves life. I know I can't have both very long. The trade-offs are all right with me. But if the legacy we helped give Oregon and which made it twinkle from afar—if it goes, then I guess I wouldn't want to live in Oregon anyhow."

Measure 6 failed to pass in the '82 election. McCall was admitted to Good Samaritan Hospital in Portland just over a month after the election....Tom McCall died of prostate cancer on January 8, 1983.

His words were so passionate, pleading, and personal. I feel them deeply. Oregonians who remember Tom McCall realize how much we owe him. I hope that new arrivals, those who move here to live, will know it too. And now there is a bronze statue of him to admire and cherish along with his memory. I think I'll visit the monument there on the banks of the Willamette River some morning really early when I can call my tribute out over the water:
Thank you for Oregon

This reminded me of when i went to China in 2000. They still have Chairman Mao lying in state in the centre of Tianamen Square. The irony is that it used to be required viewing for every Chinese citizen - but now it's little more than a tourist attraction. Kinda wierd when you think about all the "purgings" that he was responsible for.

Anyway - it was closed when i was there for refurbishment (the rather sick joke was they were glueing his nose back on) and looking back i'm kinda glad i didn't get to see him.

McCall sounds like an interesting man...so rare that you get those in politics now!

Hai
Great blog
I'm happy I'm here
I hope Sweet Dreams
And I wish you success
I hope my visit
Mother of the World
http://alghnam2312.blogspot.com/
I hope to be friends
With greetings

Great post, Lydia. I put off reading it on account of how long it was, but I'm glad that I finally took the time.

I remembered that it was relevant to what I was currently doing, which was research on the Oregon Coast. I recently got a postcard from a fellow blogger who graciously sent me one (you know how I love pc). I will be sure to link to the post you did about Oregon's Beach Bill, which was something I planned to note in my pc post.

I always seem to leave here having learned something new. I love that about you, and your blog!

Have a great weekend :o)

Citizen of Earth,
As always, thank you for your thoughtful comments.

DFTP,
I had no idea Mao was hanging out in Tianamen Square! I imagine you must have enjoyed watching the Olympics, having been there and all.

Tarek,
Thank you so much for visiting and for leaving your kind comments. I'm off to visit your blog in just a few minutes. :)

Wayfaring Wanderer,
You are so sweet to return to read my long post about Tom McCall; I'm glad you "met" him! That's kinda exciting that my post on the Beach Bill in some way ties in with your latest postcard (I look forward to seeing what scene it is).