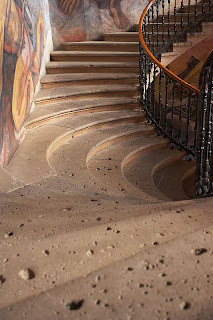 I have only recently become aware of Paulo Coehlo via other blogs, have not delved deeply into his own blog and other writings, and have not yet read The Alchemist, his best-selling work mentioned below. Evidently, the book will be made into a feature film to be released in 2009, so I've put it on my reading list before release of the movie.

There's a photo of Coehlo here at his blog showing him posing with his bow and arrow in the high mountains. It's not a hunting-style pose, but is befitting of his "Warrior of the Light" code. I relate to it because I excelled at archery in college. I also related especially to the newsletter issue below. It was a bullseye for me, so to speak.

Once a year I go to the Benedictine abbey at Melk in Austria to attend the Waldzell Meetings – an initiative of Gundula Schatz and Andreas Salcher. There we remain in a sort of retreat for a whole weekend together with Nobel prize-winners, scientists, journalists, two dozen young people and some guests. We cook, stroll through the gardens of the monumental setting (which inspired Umberto Eco’s “The Name of the Rose”) and talk informally about the present and the future of our civilization. The men sleep in the cloisters of the monastery and the women in hotels nearby.

The 2005 meeting was all that could be expected, especially the impassioned discussions and the moments of joy and confrontation. Almost all the guests went back to their countries on Sunday evening, but because on the next day the organizers and I were to take part in the opening of the Austrian legislation of the Road to Santiago, we had to spend the night in the abbey. Father Martin invited us to have dinner in his “secret place”.

Full of excitement, we went down to the basement of the old building. An old door opened and we found ourselves in a gigantic hall where there was everything or practically everything that had been gathered over centuries and that Martin refused to throw out. Old type-writers, skis, World War II helmets, old tools, books no longer in circulation, and – bottles of wine! Dozens, hundreds of dust-covered bottles of wine, the best of which were selected by Abbot Burkhard as dinner proceeded. I consider Burkhard to be one of my spiritual mentors, although we have never exchanged more than two phrases (he only speaks German). His eyes express goodness, his smile shows immense compassion. I remember that he was once assigned to introduce me at a lecture, and to the dismay of all he chose a quotation from my book “Eleven Minutes” (which deals with sex and prostitution).

While I ate, I was fully aware that I was experiencing a unique moment in a unique place. All of a sudden I realized something important: everything in that basement was tidily arranged, made sense, was part of the past, yet made up the history of the present.

And I wondered: what in my past is tidily arranged, but I don’t use any more? My experiences are part of each day, they are not in the basement, they are still active and helping me. So to speak of experience would be wrong thinking. What would the right answer be?

Yes. Looking at the basement at Melk Abbey, and understanding that not everything that is no longer used should be discarded, I realized that in the basement of my own soul lay my mistakes; one day they helped me to find the way, but after I became aware of them, they no longer have any utility. Nevertheless, they need to accompany me so that I don’t forget that because of them I slipped and fell and nearly did not have the strength to rise again.

That night, on returning to my cell in the cloisters, I made a list. Here are two examples:

A] The arrogance of youth. Whenever I was a rebel, in search of a new path, this was positive. But whenever I was arrogant, thinking that those older than me knew nothing, I missed learning so much.

[B] Forgetting friends. I have had many ups and downs. But on my first “high” I thought that I had changed my life and decided to surround myself with new people. Of course, at the next down, the newcomers all disappeared, and I could not resort to my old companions again. Ever since then I have tried to treasure friendship as something that does not change with time.

The list is enormous, but the space for the column is limited. However, although my mistakes have taught me all that I needed to learn from them, it is important that they remain in the basement of my soul. In that way, when occasionally I go down there to find the wine of wisdom, I can contemplate them and accept that they are part of my history, the foundations of what I am today, and that I need to bear them, however tidily arranged (or resolved) they may be.

Otherwise I run the risk of repeating everything all over again.

In the recess of the heart

Days after I wrote the above text and sent it off to Austria, I received a letter from Abbot Dr. Burkhard Ellegast, OSB. Here are some of his reflections:

We often wonder: how did that ever happen to me? All of a sudden I found myself surrounded by people who were willing to reflect on the meaning of life. What could I tell those people, if all that had happened in my existence was to join a convent when I was still young, and then later on be assigned to direct this abbey for 26 years?

I think that people looked to me as if I had an answer to everything. But all that I decided to do was talk a little about myself. To say that my faith is capable of keeping me alive and eager to carry on, despite the moments of pessimism. Then I explained my motto: if I ever take the wrong step and get dragged down, it will never be done discreetly. Everyone will hear me shouting and kicking and waving flags so that I can serve as an alert for those who come after me.

Because of this motto, I know that I will hardly lead others with me in my mistakes and so I manage to dominate my fear and risk sailing my boat into unknown waters. Of course I know that if I begin to drown, no matter how loud I cry out, I can still hold up my hand and ask: God, please help me! I am quite sure I will be heard, and that a new path will open up for me.

In his article, Paulo Coelho comments that he was surprised to see that I introduced him with a quotation from his book “Eleven Minutes”. I read an extract from the diary of the main character, where she tells the story of a pretty bird that used to visit her. She admired it so much that one day she decided to keep it in a cage so that she would always have its song and beauty by her side. As the days went by, she grew used to her new companion and lost the fascination of waiting for that free soul to visit her from time to time, without any obligation. As for the bird, it could not sing in captivity and eventually died. Only then did she realize that love needs freedom to express all its enchantment – although freedom implies risks.

We tend to look for captivity because we are used to seeing freedom as something that has no limits or responsibility. And for that reason we end up trying to enslave everything we love – as if egoism were the only way to keep our world in balance. Love places no limits; it widens our horizons, we can see clearly what is outside and we can see even more clearly the dark places in our heart.

Though I don’t speak English, I was able to understand all that Coelho’s eyes and gestures were saying. I also remember when he asked me, through somebody in the audience, what he should do now. And I answered: keep on looking.

And when you find it, even so keep on looking, with enthusiasm and curiosity. In spite of all the mistakes that may be made, love is stronger, it lets the bird fly free, and each step will be not just a move forward, but will contain a whole new path.

Copyright @ 2004 by Paulo Coelho –Warrior of Light Online comes out twice a month, and may be distributed for free on the Internet and placed in pages whose content is free, as long as the source “Warrior of Light Online, published by www.paulocoelho.com.br” is quoted. The author reserves the right to alter these conditions at any time.

Translated from the Portuguese by Margaret Jull Costa
`

Posted by Lydia at 2:06 AM Labels: Paulo Coelho, The Alchemist, The Basement Secrets

I have the Alchemist and love it, though I think my favorite book of his so far is By the River Piedra I Sat and Wept (or something like that).

Paulo Coelho was in the beautiful Melk Abbey, which is a 30-minute-drive from where I live. Maybe this will lure you to Austria ;-)!

Don't miss the small tours around the abbey. Some parts of the page are in English.

Elizabeth,
It's so great to know your impressions of both these books. On my list, most definitely....

Francessa,
You and Elizabeth have convinced me that I must read The Alchemist.
Thank you for these interesting links! Looks beautiful! When I ever get the chance to travel there we'll tour together, ok? And show me lots of places having to do with Mozart, please!