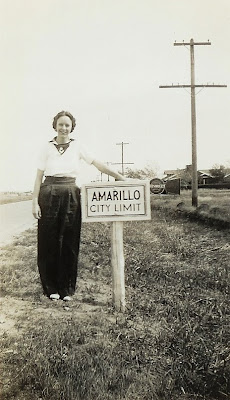 I've never visited Amarillo, Texas, but it doesn't take too much imagination to figure that the view of the town's city limits changed considerably since my grandmother snapped this photo of her daughter.

November 15, 2008, was the 40th anniversary of the opening of
Interstate 40 that bypassed Route 66 and Amarillo Boulevard, then the main thoroughfare in town. I'd be curious to know if my mother was standing beside old Route 66 or if the city limit sign was on Amarillo Boulevard.

There is an informative and poignant look back at the construction of
Interstate 40, and of the destruction it left in its path in Amarillo, here at Amarillo.com. Here's a brief excerpt:

Car-cultured Americans love the poetry of the road.

We ponder our fates at crossroads, question the fork we should take.

Amarillo found itself at a crossroads in the 1950s as an evolving society accelerated plans to leave the quaint kicks of Route 66 in the dust.

Interstate 40 - and other interstates in the 40,000-mile system launched by the Federal-Aid Highway Act of 1956 - promised travelers a "limited-access, high-speed" driving utopia.

"There will be no traffic tie-ups where the interstate goes," declared the narrator of a 1961 film the U.S. Bureau of Public Roads produced to counter criticism that interstates would displace homes and businesses, harm cities and cost too much. . .

In reality, I-40 displaced many Amarillo residents and workers by the time it opened here 40 years ago on Nov. 15, 1968. And many small towns suffered death-by-bypass.

The then-Texas Highway Department acquired about 770 parcels of Amarillo land - 500 of which included homes or businesses - so that I-40 could slice through the city on a much-disputed central route.

They took my saddle in Houston,
Broke my leg in Santa Fe.
Lost my wife and a girlfriend,
Somewhere along the way.
I'll be lookin' for eight
When they pull that gate
And I hope that judge ain't blind.
Amarillo By Mornin'
Amarillo's on my mind.

Amarillo By Mornin'
Up from San Antone
Everything that I got
Is just what I've got on.
I ain't got a dime,
But what I got is mine.
I ain't rich, but Lord I'm free.

There's a lot of new buildings going up in my home town right now - the skyline is changing forever and quite frankly its turning into a place i don't like much - overpowered by huge buildings and crammed into a tiny space. There are some nice bits - but you have to know where to look.

I guess Amarillo will also have changed since that photo - my father has lots of photos of his family in Sheffield (where his family originate from), but if you went there now most of the buildings shown would be long gone.

Speaking of songs - thanks to this post i now have Tony Christie's "Is This The Way To Amarillo" stuck in my head! Do yourself a favour - don't look it up!!! (Seriously - interesting topic as usual xx)

Amarillo is in a shallow valley and
the night view entering from the
east is breath taking. I have done
it a number of times at Christmas,
head hanging out the window of a
'50 mercury staying awake. The
memory will never erode.

Hi Lydia,
Amarillo is an important milestone in my memory. I grew up in Fort Worth, Texas. For several summers as a teenager my family and I went to Red River, New Mexico. Many adventures there and my first look at mountains! Amarillo meant we could (unrealistically) start looking for the mountains which would show up on the skyline, actually still hours away. Loved the song. Your mom looks so cute.

The fact that you show us this wonderful picture of your mother as taken by your grandmother is so wonderful. I mean, watching this old picture makes me feel nostalgic about the past, my own past, my parents, my grandfather. How strange sensation you experiment after watching these old fragments of time that your family lived in the past. It makes me happy and sad. Reading your musings about the sign by the road near Amarillo, the music as the background, the quality of this bw picture, the moment it represents makes me sink into the story and I think I can just feel it more or less as you do thanks to your great narration. Thanks.

Amarillo is just a very musical name, it's in a lot of songs, Dylan's "Brownsville Girl," "Kansas City" (covered by everybody), and...ummm...I know there are more....

DFTP,
I had the impression that the UK was preservation-oriented than what you describe in your town and in Sheffield. Makes me sad to learn I was wrong.
My little town just elected a controversial mayor (with my financial assistance I might add), in large part due to backlash against the growth perpetrated by the current mayor and city council.
I am going to follow your advice and not look up that song - at least not right now.

JFrancis,
I loved the personal imagery you shared in your comments. Your head-hanging-out-the-window drive describes me in college on the roads outside of Reno, only I was trying to sober up....

SharryB,
As with JFrancis, I loved having your personal memories enhancing this post. Interesting to think of Amarillo in that anticipatory manner. And now I realize where that marvelous childhood shot of you sitting on the mailbox (at your blog) was taken! :)

Carrie,
Thanks so much! And I think this might be your first visit here. Welcome back anytime, and I'll be visiting your blog in a bit...

Carlos,
You feel this photo and how the poignant song suits the background of the shot: The time, passed. The people involved, now dead. the town, modernized. The link to us all, there by a whisper and a wish. Thanks much for experiencing it with me in this way.

Yoga for Cynics,
You're right about Amarillo being a musical sounding word. Armadillo is not. How can that be?
Please see Pixies comment above for one more song about Amarillo.....

Thanks for your comment on my page of Youtube (George Strait - Amarillo by morning). I am gratified that you like my work and also to country music. It's very good blog and photos of Amarillo with your mother.
You send a greeting from BUENOS AIRES.
uPPETUs, Argentina.

Uppetus,
Thank you again for your excellent video. Thank you, also, for your kind greetings from Buenos Aires here at my blog! Best wishes to you.