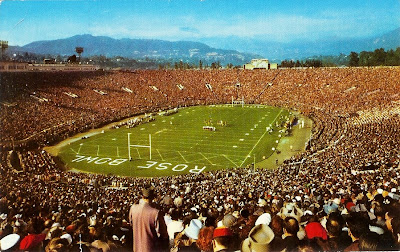 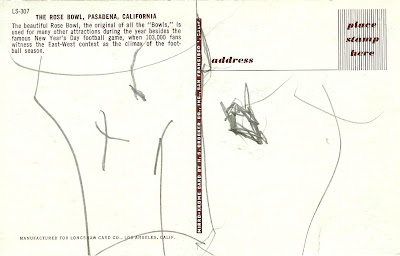 The only way I can place any kind of date on this old postcard is by the publisher's name on the back, Longshaw Card Co. A marvelous resource titled Metropolitan Postcard Club of New York City has a detailed listing and it says that Longshaw was in business from "the 1930's -1957." (Speaking of the back of the card, it appears to me that a child attempted to draw the playing field in his/her pencil sketch.)

As noted in 154 Facts about the Rose Bowl Stadium, the seating capacity is 92,542. This old postcard says that "103,000 fans witness the East-West contest...." so either overfilling the stadium must have been common decades ago, or the postcard publisher embellished the number of fans!

The Rose Bowl is the oldest college bowl game, held continuously since 1916. I admit that I'd never wondered about the history of the Rose Bowl Game until reading about it here. Rose Bowl 2009 pitts 8-ranked Penn State against 5-ranked USC.

My reading wandered around numerous bits of information about each of the universities playing in the 2009 Rose Bowl game, and I found that each has a special attachment to specific trees. I liked that. A lot.

Article below from the USC website, About USC section.
Photo (I cropped) by Pete Carroll.

The Significance of USC's Motto

USC’s motto, PALMAM QUI MERUIT FERAT, can be loosely translated from the Latin as “let whoever earns the palm bear it.” The expression reflects the broad significance of palms, palm fronds and other branches of foliage as symbols of triumph, victory, ascension and regeneration in ancient times, and in particular may allude to the Roman custom of giving the victorious gladiator a palm branch as reward for prowess.

One of the earliest references to the phrase is found in a small volume of Latin verse, titled Lusus Poetici, which was first published by English theologian John Jortin in 1722. Decades later, it became widely known as the personal motto of Horatio Nelson, a British naval hero who distinguished himself during the Napoleonic Wars. In 1798, after a spectacular victory over Napoleon at the Battle of the Nile, Nelson was granted the title of Baron Nelson of the Nile, and the words PALMAM QUI MERUIT FERAT were added to his coat of arms.

Over time, the saying has been used as a watchword by diverse organizations ranging from athletic clubs to educational institutions such as the British Royal Naval School and other military academies as well as high schools, preparatory schools, and colleges and universities around the world. USC adopted the motto in 1908, when it was incorporated into the design of a new university seal.

Alluding as it does to accomplishment, righteousness and victory, USC’s motto speaks to qualities that are as inherent to the university today as they were in 1908. By holding fast to its foundational self-reliance, “we-can-do-more” spirit and steadfast commitment to open access for all students of merit, the University of Southern California indeed has earned the palm. Although it is less than half their age, USC ranks among a peer group of U.S. universities that includes Princeton and Yale. But USC is not content to rest upon its laurels. As President Steven B. Sample has put it: “USC is characterized by a keen desire to do even more tomorrow no matter how much we may have accomplished today.” USC has set its sights on becoming the worldwide paradigm for the research university of the 21st century. That goal is yet another palm, and USC is determined to earn it.

Photo and portion of commentary from Penn State website. Click on link for full article about the transplanting and nurturing of this special tree.

The Hosler Oak ("The Witness Tree")

On September 28, 2005, the first official tree in the future botanic gardens was dedicated to the Arboretum in honor of Dr. Charles L. Hosler, senior vice president for research and dean emeritus of the graduate school and professor emeritus of meteorology, and in memory of Dr. Hosler's late wife, Anna Rosa Hosler. The tree, a white oak (Quercus alba) is a gift from George Biemesderfer, a Penn State alumnus in agriculture, who wanted not only to commemorate his cousin and mentor, Dr. Hosler, and his wife, but also to inspire others to help build the Arboretum. In Mr. Biemesderder's words, “The white oak is a big tree. But really, it’s small in respect to the whole project.”

On March 21, 2005, the tree was transplanted from Green Acres Nursery (owned by Mr. Biemesderfer) in Lititz, Pennsylvania, to the grounds of the future Arboretum at Penn State just north of the University Park campus. The tree, which is 35 to 40 years old, has a 14-inch diameter a foot above the ground, and is 33 feet tall.

A tree this large required extensive preparations for transplanting. Those preparations began in November 2001 when extensive trenching was done around the tree in the nursery to encourage root development. . .

Two days were required for digging and preparing the tree to be transplanted. When it was lifted by a 50-ton crane from the ground, the entire tree and its 9-foot root ball weighed approximately 14 tons, making it the largest tree transplanted onto Penn State property since at least 1933, when two large elms were planted at the front corners of Old Main. . .

. . . It will eventually grow to be 80 to 100 feet tall with a trunk 3 to 4 feet in diameter and a spreading crown form typically seen on old, open-grown white oaks in the central Pennsylvania countryside. This will be the Arboretum's "witness tree," a living cornerstone that will witness the full development of the Arboretum. A century from now, this tree will be a prominent feature of the Arboretum landscape and a venerable reminder of its origin. . .

Thank you for visiting my blog, Naomi. I enjoyed your comments and must say that you are looking good today.

Your research on the Rose Bowl and UCLA was most interesting. Thank you for the information.

Have a very Happy and Healthy New Year.

Have a wonderful NEw year.

Happy New Year! I just got another postcard post up in my blog.

That card, front and back, looks typical of 1960s or early 1970s chrome postcard publishing.

BTW: my verification word right now is "Hypertan". Sounds like a quick path to skin cancer to me.

Darlene,
It's nice to see you as I am aware that you've been quite ill. Here's to a healthy 2009!
Your computer seems to have combined your messages to Naomi and me. I'll visit her blog to let her know there's a comment to her here!
Take care of yourself. :)


dmarks,
I would agree with you about the early 60s but not any later. I base this on the style hats the men are wearing. It's probably right there in 1957, the last year that this card publisher was in existence.

That's a great site I linked to in this post for research on your postcards. I'll come by and see your latest...right...now! :)

My husband grew up in the hills right above the Rose Bowl in Pasadena (and got a master's at USC, though he isn't exactly a rabid sports fan). He has lots of memories of the Rose Parade, fewer of the Rose Bowl. Pasadena is a beautiful town.

Things are slowly coming back to normal here, so I hope to stop in more frequently again.

Jennifer,
I knew there was more to USC than sports alone and I did enjoy learning more about the campus, etc. And I've seen Rose Parades but only on TV.
I'm amazed at all you do, so I think it's great when you stop by here.
Happy New Year!

Happy New Year to you too - do not feel terrible about not visiting my blog, and be aware that "Mainframeguy Chirps" is my secondary blog for matters geeky. My primary blog is Didactic.me - but I have barely been keeping that up since the twelfth December anyway; reason being I am redesigning it and implementing updated blog software, a matter I shall probably blog about on "Mainframeguy Chirps", ironically!

I do not care how often people read what I post - that they read at all is quite enough for me!

It's very cool that you are redesigning your blog. It'll be fun to read about it in the other one. I want to change my template in the next two months (will stay with Blogger for ease), but I'd want a different header than the one that comes with the template. That might not sound like a big deal to you but I'm stymied. It's daunting for a non-techy!

very informative post. interesting how a found post card is timely with the football fever that's going around right now.

hope you had a great New Year's Day!

Steve,
Thanks! I did have a great New Year's Day and just posted about it. It's late for me now so I'll be by later in the day to read about your New Year's happenings.

I am impressed your research. What interests me is the fabulous Rose Bowl parade, especially now that Macy's is more about balloons than floats. Interesting post.

TropicGal,
Thanks for visiting my blog and leaving nice comments. You make a good point about the Macy's parade. Being up here in the Pacific NW, I've been to quite a few Grand Floral Parades in Portland during its Rose Festival. The floats in Portland can be made from natural things other than roses ... including all flowers, nuts, grasses.