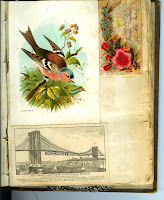 In an earlier post I explained the two old scrapbooks that have been passed down to me that, long ago, belonged to distant relatives Mable and Jennie.

Jennie was my maternal grandmother's older sister. She was born in 1872 and died in 1885 at age 13. Her scrapbook and one photo of her with my then-toddler grandmother are all that remain of Jennie's short time here. 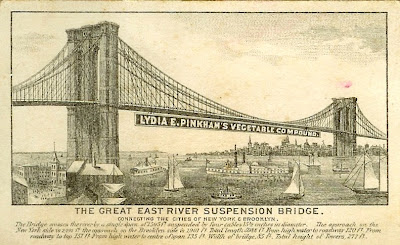 It was surprising to find a site with a photo of this same drawing plus information about it, including the fact that this is a trade card. The site providing this info belongs to the Museum of Menstruation and Women's Health -- mum.org (and I am not kidding). You could spend maybe a day reading everything that mum.org has to say about Lydia E. Pinkham, her compound, and her business. Click here to see the same card and also a link that features the back of the card, which intrigued me because Jennie did such a great job pasting the card into her scrapbook that the back would have remained a mystery. This text is from the site:

In 1875, after her husband went bankrupt, Lydia Estes Pinkham started probably the first widely successful business run by a woman in America. Her product was a medicine for "all those painful Complaints and Weaknesses so common to our best female population," meaning mostly menstruation. Even though Mrs. Pinkham had been in the temperance movement, as a student of phrenology she had studied human nature, and almost 20% of her concoction was alcohol, which she said acted "as [a] solvent and preservative," certainly solving many a problem and preserving not a few of her fellow citizens. Many similar medicines of the past used alcohol as the active ingredient, which was often the only way respectable women were able to enjoy the intoxicant. And during the banning of alcoholic beverages in America, especially in the 1920s, the Pinkham "medicine" enjoyed its greatest success.

The Brooklyn Bridge decorates a trade card (... 4" x 2.5", 5.1 x 6.4 cm), black and white) for her product. Companies advertised their products on these cards, which were available free in stores. Sometimes consumers collected them and even pasted them into albums. This card probably dates from the late nineteenth century (the Brooklyn Bridge was completed in 1883, the year she died). The sign hanging from the bridge is as imaginary as the claims she made for her compound, which are listed on the back of the card.....The words below the picture give some data about the bridge, a wonder of its day, which is perhaps what Mrs. Pinkham wanted Americans to believe about her cure.


Click here for a photo of Lydia E. Pinkham. The following information is from the site carrying the photo:

Lydia Estes Pinkham was famous for her proprietary medicine. She grew up in a circle of antislavery leaders and she participated in many reform movements. Pinkham married in 1843 and when her husband lost his money she decided to sell a home remedy to treat female complaints. Pinkham mixed vegetable roots with 19% alcohol. In 1876 she registered the label and trademark, with her soon-to-be-famous face on the label. The product did well in the 1880s thanks to Pinkham's innovative advertising copy and strategies. Although she died in 1883, her product reached its peak in 1925. The words underneath read "Yours for Health. Lydia E. Pinkham."

If you do visit the link at Wikipedia don't miss the drinking songs! ......introduced as follows:

Drinking songs that consist of numerous verses describing the humorous and ribald invigorating effects of some food or medicine form almost a small genre in themselves. Lydia and her "medicinal compound" are memorialized in the folk songs "The Ballad of Lydia Pinkham," and "Lily the Pink". A sanitized version of Lily the Pink was a number one hit for The Scaffold in the United Kingdom in 1968/69. This song was successfully adapted in French in 1969 by Richard Anthony, describing humorously the devastating effects of a so-called "panacée" (universal medicine). It should not pass without mention that the reason a humble women's tonic was the subject of such and sundry ribald drinking ballads and an increasing success in the twenties and early thirties was its availability, as a 40-proof patent eye-opener, during Prohibition. As folk songs, they have no definitive versions. Some representative samples will convey their flavor:

Another late night I see.
You and I seem to have a problem going to bed.
Some of Lydia's medicine seem to be in order- actually I was thinking a shot of tequila before I start my Om meditation.
How are you feeling? Are the winter gloomy days still keeping you down?
I am a bit burned up.
I'm thinking I need a break from blogging. It drains my energy.
I don't know how you do it.
You must spend hours on your posts. So many and so perfect.
You make all of us look bad :(
Just kidding!
OK I finished another post and now I will go to bed.
Be loved!

I saw the Brooklyn Bridge once for 2 or 3 seconds. Lit up green at night. Very memorable. I hope to see it again sometime, in distant future years.

Nearby, I saw the World Trade Towers, rising into the clouds.

Interesting story, that of old postcards on Jennie's scrapbook curiously about a woman named Lydia. I know this is not related in any way but it is curious that the name of that early American female entrepreneur coincides with your name. She did live for a short time, I mean Jennie, talking about briefness in that post the other day. Thanks for that comment and all the others Lydia.

Wow, I don't have anything that old from my people. We do have my great-grandma's diary from the early 1900s. I thought it was incredible when I picked it up. But I read it, and it's boring as dirt.

Have you ever found ephemera from the WCTU? One of my favorite women in history is Frances E. Willard who in late period 1875-1890 increased its membership with approaches that might be seen as precursors to Obsma campaign.

I have a paper fan from a church with her photo on it and a book about her with a beautiful color foldout of one of their banners.

I am still chuckling that there is a museum of menstruation. then again, why not!

Buddha,
We've had sunshine for a few days, which makes me extremely satisfied inside.
I'm sorry you're feeling some burnout and if you are you certainly deserve a break from blogging if it would make you feel better. I really missed you when you were on vacation, though. :)
Actually, the only posts that take hours (sometimes) are the Wed. postcards when I delve into the research. But I love it and I really get into flow. Same with the writing. It's my outlet. What I need more of is yoga and I need to structure my time better to ensure practice.
It interests me that you do OM meditation before bed. I like that idea....lots.

DMarks,
My husband and I were married at the Municipal Building, right near the Brooklyn Bridge. The towers are in the photo that a photographer took after the short ceremony. We were up on the Observation Deck the day before. That all seems very surreal now....
My cousin recently walked across the Brooklyn Bridge. That sounds like a fun thing to do.

Carlos,
I'm finding that Lydia was a fairly common name back in those days. No wonder I have the two Lydias in my background: maternal great-grandmother and paternal grandmother!
Yes, Jennie's life was short. Isn't it cool that we all know something about her now? :)

Erin,
Boring as dirt, huh? Well, life back then was fairly nose-to-the-grindstone. It interests me that, in spite of a hum-drum life, those folks found enough in it to record their activities/thoughts. My grandmother actually kept a journal of her garden....which is truly boring as dirt :)

Naomi,
I had to google WCTU! So, no, I haven't studied that movement or the people in it. Francis E. Willard sounds like an interesting historical figure that I should learn about, especially as her ideas might relate to Obama's campaign. Your collectibles sound wonderful.

Elizabeth,
Yeah, I guess why not, especially since, because of it, women's lives are driven by our hormones for decades! I hope there's a PMS wing in the museum....the miserable, cursed horror that it is should be researched and cured!

This is all very interesting, especially Lydia's secret! I had to look up all the ingredients (as found in the Wikipedia-link), they sounded so exotic in the English language. They are all well-known herbs, so the secret must have been fairly effective!

This is really fascinating -- who would have known that a card from Jennie's scrapbook would yield such interesting material, a little bit of women's history, with ties to the prohibition and to a certain variety of folk music: drinking songs.

And Jennie gets to live on, too, gets new life via your blog.

Francessa,
O, you looked up the ingredients! I wondered if anyone besides me would do that. They changed considerably from Lydia's original recipe to what's produced now. I thought it was interesting that you said they were all "well-known herbs" because I'm not so sure they all are known well here. I guess more and more people are using them. I take only a few, and it worries me that the FDA doesn't regulate that industry..... :)

Jennifer,
You said it! I selected that particular page because I thought there wouldn't be much to write about the bridge, not being an engineer myself.....
Jennie's life being given a bit of attention here seems the least I can do since she's let me borrow her scrapbook. I wonder who, if anyone, will have it after I go off to play with Jennie....
(man, I'm in a weird mood tonight!)