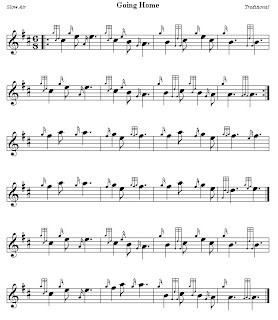 {This is the 12th in an undetermined number of songs my mother taught me I'm posting this month in her memory. For background, please visit the post containing the first song, Ivory Tower.}


My mother liked classical music in a basic sense, but her taste ran more toward popular music. My love for classical music and opera (adored by her father) was not passed from my mom to me, was developed on my own. It was interesting to share that appreciation with her after she retired and moved to Oregon. I got her to some symphonies but never an opera. In the final weeks of her life I played classical music (and easy listening instrumentals) that I found soothing and assumed that she did also. But it wasn't until one day I put an old Marty Robbins record on the stereo in her family room that I returned to her bedroom to see her face changed to a happy dreaminess. "Love it, love it, love it," she said emphatically.

It is precisely because her interest in classical music took a backseat to other musical forms that I can easily recall her favorite selections. She told me when I was a child that her mother loved "Going Home" and would hum it around the house when she was a girl, which she in turn did for me. She said it was composed by Dvorak, and I remember being somewhat confused that there were words to a classical piece. (See below that the tune was likely a spiritual that Dvorak liked and adapted for the symphony*) It was years later that I listened to the entire symphony with its wordless 2nd movement, but of course whenever I hear it I think of that part as one of the songs my mother taught me.

She died in 2000 on this day and we had her memorial service a few weeks later. Going Home was not among songs on tape that were played over the speakers in the funeral home, although as I read information for this post I realized it is a favorite at funerals.

Less than a year after her death, September 11 happened and I was so grateful that my mother with the "Pollyanna" outlook on life did not have to endure the shock that the rest of us lived through together. Only a few days later, The Oregon Symphony was scheduled to perform at The Oregon Garden here in Silverton, a final toast to summer and the ending of the 2001 outdoor concert series. Michael and I had tickets and we went to the concert with some trepidation (remember those early days after 9-11 when we were unsure of the safety of being in large gatherings?).

The setting for the outdoor concerts there is so lovely. Concert-goers sit (in low lawn chairs only) in a grassy bowl facing where the setting sun is seen through an oak grove behind the stage.

We were advised at the outset of the concert that we could not depend on the program that had been printed prior to 9-11. The conductor was changing some music commensurate with that moment in time. I remember only the final piece --  Dvorak's 9th Symphony, 2nd Movement: Going Home. Michael and I held hands, and as we did I felt so close to my mother. I sat there in awe of the punch of color tracing the coast range in the distance. Did I cry? I do not remember. Many did. The many, who shared the surreal beauty of the song being offered up to the old oaks and the sunset and the ether. It was all we had to give. And such tenderness to take.

. . .The Symphony is subtitled "From the New World" and was composed by the Czech composer Antonin Dvorak during an extended stay in America when he took up a post there in New York. Dvorak became homesick and this particular movement is often interpreted as an expression of his longing to be home in his native land. It is therefore appropriate that the music was turned into the song called "Going Home". Dvorak's New World Symphony was also one of the two recordings chosen by astronaut Neil Armstrong to take to the moon. Perhaps it was a personal favourite, or perhaps he looked upon the Moon as a "New World". . .--mfiles.co.uk

*Henry "Harry" T. Burleigh (1866-1949) African American Composer, Arranger, and Baritone (and thought to be the composer of the spiritual that Dvorak adapted for the 9th Symphony, 2nd Movement)Burleigh't teachers at the National Conservatory did not include the school's Director, Antonin Dvorak, but the two did spend considerable time together outside of classes. . . Burleigh often sand spirituals for Dvorak, and began working as his copyist in 1893. He also played the double bass and the timpani in the Conservatory's orchestra, of which Dvorak ws one of two conductors. . .

He was not a student of Antonin Dvorak, as is often assumed, not then being sufficiently advanced in his theoretical studies, but he spent much extracurricular time with the Bohemian composer, acquainting him with the spiritual repertoire . . .He also served as double bassist and timpanist in the school orchestra, conducted by Dvorak and Franz von der Stucken.--AfriClassical.com
{Personal note of interest: The header of the AfriClassical website linked above features a photo (at left) of James DePreist, who was the music director and conductor of The Oregon Symphony from 1980-2005, and conducted the program we heard after 9-11 at The Oregon Garden.}

I like your story with this song. May I somehow re-post this on mine or maybe a link.

It was worth reading.

I think everyone is familiar with the melody of "Going Home" as it is still very popular. I used to play it on the piano when I was feeling melancholy.

There are other popular songs taken from the melodies of Symphonies such as "Moon Love", which I am sure your mother was familiar with. Tchaikovsky's symphonies were the inspiration for other song writers to use his lovely melodies and write lyrics to them.

So poignant, so sad, so beautiful. I'm sorry for the loss of your mother on this day nine years ago, Lydia. Sissel's voice is so incredibly moving; I can see how tis song is performed at funerals and memorials. I didn't know Dvorak wrote this or that Neil Armstrong took it to the moon. Lovely. Lots of love to you, Lydia.

This song touches your heart... I really loved this post.

@SongDiary- I'm honored that you would consider re-posting this at your blog. I sent you an email earlier today about it. Thank you for your visit!

@Darlene- Interesting that you would mention Tchaikovsky's symphonies, because his Symphony No. 5 in E minor --- I've always thought --- was adapted by Cole Porter in his song "Farewell Amanda" in the K. Hepburn movie Adam's Rib. At least the opening lines seem close to me...

@Margaret- Thank you for your sweet message; so appreciated it. It was a strange day in that I had a two-hour repair appointment on my car, so brought a book I'm trying to finish and went to a restaurant within walking distance that my mom enjoyed. Had brunch and read. I was very much at peace.

@Phoenix- It touches my heart too. And I really loved your comment. :)