Movie lines I love: on a full moon and always 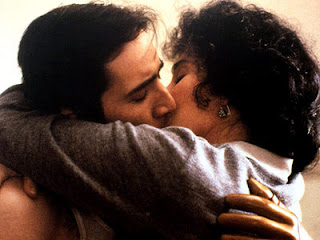 If I knew I was dying and that I had time to watch only one movie that movie would be Moonstruck. When we walked our dogs on Saturday evening and saw the brittle-looking November full moon up there in a sky that may bring some snow flurries our way by early next week I knew what my next post would be. I took some photos from our yard after we returned home from our walk and you can view them at the end of this post. 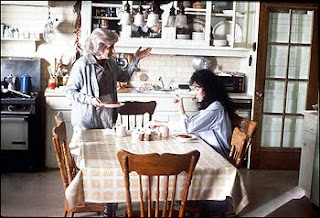 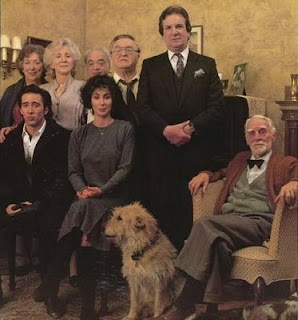 La bella luna! The moon brings the woman to the man. Capice?
-from Moonstruck (1987), spoken by Old Man
~~~
RONNY CAMMARERI: I love you.
LORETTA CASTORINI: [slaps him twice] Snap out of it!
~~~
Loretta, I love you. Not like they told you love is, and I didn't know this either, but love don't make things nice - it ruins everything. It breaks your heart. It makes things a mess. We aren't here to make things perfect. The snowflakes are perfect. The stars are perfect. Not us. Not us! We are here to ruin ourselves and to break our hearts and love the wrong people and die. The storybooks are bullshit. Now I want you to come upstairs with me and get in my bed!
-spoken by Ronny Cammareri
~~~
COSMO CASTORINI: A man understands one day that his life is built on nothing,                        and that's a bad, crazy day.
ROSE: Your life is not built on nothing! Ti amo. 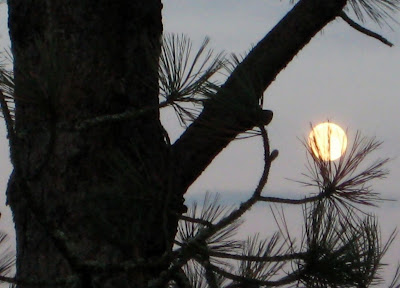 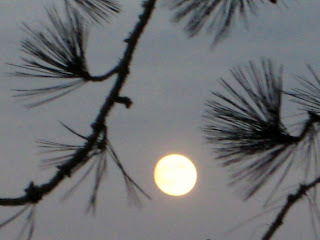 .
Posted by Lydia at 3:09 AM Labels: Cosmo's Moon, La bella luna, Moonstruck, Movie lines I love, November 2010 Full Moon images, the movie I would want to watch before I die

Is there any chance that I can be forgiven for never having seen "Moonstruck"? However, SO many friends have told me I MUST see it, that I have put it on my Netflix queue. It does sound really good and like something I would love.

I like that movie, too, Lydia...actually, I'm a huge fan of all Cher movies, and I think that this is one of her best.

Beautiful pics of the moon you've captured. I tried last night, but don't think mine came out.

And am I crazy? Or wasn't the line, "Look, it's Lazlo's(sp?) moon!" in the movie? I can't believe that the Goog is rendering no results on this one...

I love the quotes and know what you mean about Moonstruck though I would not say it was my favorite movie. It's funny. I went with my 11 year old daughter to see the new Harry Potter movie last night. I actually enjoyed it. But maybe it was just the chance to have that special time with her. But she asked me what my favorite movie of all times is and I could not answer. There are so many movies that I love. Among them: DIva. The Gods Must Be Crazy. Brother from Another Planet. Manhattan. I used to really love Harold and Maude but I haven't seen it in a while and not sure if it would still hold up. A Room with a View. Just to start.

Thanks for provoking these thoughts. Sorry it has been so long since I have visited.

I love Moonstruck too, and I love those pictures of the moon with the branches in the foreground.

Fireblossom~ You of course are forgiven. I'm glad it is on your queue and would love to know your reactions to film after you see it.

earthtoholly~ The line you are remembering is one of the best. I didn't include it because I couldn't find it. Wasn't sure if it was "It's Cosmo's moon!" or "Is it Cosmo's moon?" I have found it today in the first form so added it to this post. I remember the brother-in-law says right afterward, "Is he out there?"...Anyway I saw a full moon in NYC once in March and for all the years since the March full moon is Cosmo's Moon for me.

bfk~ Where YOU been? I've missed you. We agree on the movie, most definitely.

Erika~ Nice to see you!
I wouldn't say it is my favorite movie, either. It is definitely one of my top five favorites. But as I was thinking what movie I'd want to "go out with," so to speak, Moonstruck got the nod for its richness of writing, for the depth of each character, for the fullness of the feeling of being in Brooklyn and NYC, for the humor behind it all-even the serious parts, for the music from my childhood, and for its sweet simple connectedness to the human condition.

Freda~ How fun to know that you love the movie too. Thank you for appreciating the photos...it was a truly beautiful moon last night. We won't see it tonight due to cloud cover so I'm glad it made its appearance yesterday. :)
Harold and Maude seemed strange the last time I saw it when it came on TV. Cat Stevens music still sparkled, though.

It has been far too long since I have seen this film. It is a great one. Cher was amazing in it and she earned that Oscar!

Belette Rouge~ She "cher" did!

Oh wow, how have I not seen this?! It sounds fab. I must rectify this oversight ASAP!

Maire T. Robinson~ You are a great and curious woman! Let me know what you think of the movie later on...

*****Erika and Freda~ Teehee I just read my replies and realized that I responded to your comment, Erika, about Harold and Maude in my reply to Freda. Hope this makes sense; silly of me. :)