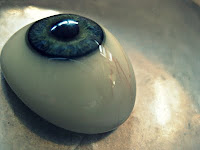 And if thy eye scandalize thee,
pluck it out,
and cast it from thee.
It is better for thee having
one eye to enter into life,
than having two eyes
to be cast into hell fire.*

And if thy wiener scandalize thee,
duck on out
after lies cast by thee.
It is better for Dems having
one less member like yours you,
than having one with such balls
cast us into election hell fire.**

Writerquake took no pleasure in what came to mind for this week's Magpie Tales photo prompt. But once the idea hatched (tweet) there was no calling it back. I hear the same is true now for many words and pictures; once they have escaped the cage they just run wild.

Personally, I think humans are the most tragic beings in the world. If I was Anthony Weiner I would head for the doghouse and forget about the House of Representatives. He lost his balance, kinda like this wiener on top of my head is about to do. It is so ugly when they fall.

very current! this would be well suited to Poetry 24 (loved that phrase -one less member!)

I love what you did here. I had to chuckle but really I think that biblical verse is perfect coupled with the eye and Weiner's well weiner!

You should submit this to The Daily Show or to The Colbert Report! They would have a field day with your poem. Hysterically funny. I agree, he needs to go.

Now, that's better than John Stewart himself would have concocted.

You mean its not 'romantic' to send women pictures of your wiener holder?

Is it true that his ring tone is "Oh, I'd love to be an Oscar Mayer wiener....that is what I'd really like to be...if I was an Oscar Meyer wiener...everyone would be in love with me...."

Looking to the Stars said...

This was good and I agree you should submit it to the Daily Show :)

I loved your post about Mary Pickford. I had trouble with my blog. I couldn't post or make comments but I got it fixed between hubby and the blogger staff :)

Men do the weirdest things. I mean, seriously, I can't imagine why an apparently sane man would sit down and start emailing pictures of his package around. Lord above.

That did just seem to flow, Lydia, so it was meant to be! Love the very clever satire! My take on all these scandals is that our society has become more and more sociopathic/narcissistic, and not everyone has that internal compass to guide him/her.
Some wit said said that's what he gets for not pronouncing his last name Vhy-ner instead of Weener...

Hmmmm...was gonna attach a pic to this comment, but now I'm getting the impression it might not be welcome...

And this political fiasco. Kids do the darndest things; especially big kids who should know better. Politics have fogged another man's brain.

Words a Day~ I visited Poetry 24 once but forgot the name of the blog until you reminded me. Perhaps I'll submit it to them.

Kristen~ Thank you. It did seem to fit (although I was not sure of the author of the verse...Bible? Shakespeare? other?....until I Googled "pluck out eye").

Helen~ At your suggestion I actually did put the link out at The Daily Show's online forum.
It will be interesting (and too distracting from important issues) to see it play out...

rosaria~ You flatter me. Big time. But if he happens upon this I hope it makes him laugh!

mythopolis~ No, my friend, it is not romantic. :\ You knew that, however, I know that you did.
Now, for the song...this is the weirdest thing. I loved that ad jingle when it played (and played) on the tube and it still pops into my head more frequently than I want to admit. And now I will never get it out of my brain!

Looking to the Stars~ There you are! It was so frustrating because I read your welcome-to-June post and attempted several times to comment. I am glad the kinks were worked out. (see my comment to Helen)

Fireblossom~ The way you said that just cracked me up! Your take is much richer than the actual tawdry situation.

Tess~ You know, since you podcast your poems at your blog and I, therefore, know your voice, I could actually hear you saying heh-heh-heh!

Margaret~ I know! There actually is another pronunciation and yet he went with wee-ner.
I think your take on all these scandals is very on point, and I even see the kernels of it in my young neighbors, all who not only want to be famous but believe they can be.
I also really appreciated your saying that this seemed to flow because it did come quickly (would that all Magpies would do the same!).

YogaforCynics~ Yeah, not really. Although the angle from any number of yoga poses might make for an interesting pic. Perhaps a 2012 calendar done by a yoga class?

Rob-bear~ Thanks much. See my comment to Helen. :)
His brain was fogged, alright. I truly just cannot fathom how panicked, depressed, hyper, desperate it must feel inside that brain right now. It is sad.

Jane~ Thanks so much. I have catching up to do with Magpies and hope to read yours this weekend.

mindlovemisery~ Thank you for your fun comment. Much appreciated.

Ren~ There are probably too many Weiner references going on right now! Glad you enjoyed this one.

Great work! Probably the best comment on the situation, so far.

paula~ Thank you so much! I am honored by your comment.