Pursuant to the Oregon Admissions Act of February 14, 1859, the State of Oregon became vested with title to the bed of the Pacific Ocean from one marine league at sea (3 miles) to ordinary high tide on the Oregon beaches, between the Columbia River and the California line. At that time, by reason of its sovereignty, the State, through its legislature, authorized the State Land Board, subject to the rights of the public in navigation and commerce, to sell tide lands to private citizens.

According to a report written in 1949 by J. M. Devers, former Chief Counsel for the State Highway Commission, there are approximately 325 miles of Oregon coastline between the Columbia River and the California border. From this area, the State Land Board, prior to 1913, conveyed out approximately 23 miles of the Oregon tidelands. 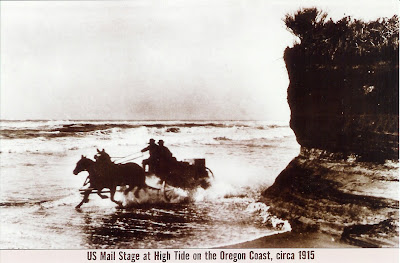 The photo on this postcard captivated me when I saw it at the Lookout gift shop at Cape Foulweather when I stayed two nights at the Oregon coast recently. A new edition of an old postcard, it is not only exciting and beautiful but was an eye-opener for me. I never even considered the idea that the hard wet sand along the coast would have been used for general roadways in the past, but of course this makes sense.

Goes to show what history is underneath our very footsteps.

It's noteworthy that the beach in this photo can today be imprinted with our footsteps, all of ours, the publics' footsteps. Oregon's beaches are open today because they were saved from development and defined as public domain in 1967. The legislation known as the "Beach Bill" -- which granted the state government the power to zone Oregon's beaches, thus protecting them from private development -- was the first major political victory for former Governor Tom McCall. He is gone now but his legacy of environmentalism in this state lives on and will, in fact, be celebrated with a new dedication this week. More about this real maverick Republican public servant in my next post...


For you legal types I'm including pertinent sections of the "Beach Bill" below (the highlighting in 390.610 Policy is added for emphasis because I just love that language):

(1) “Improvement” includes filling a portion of the ocean shore, removal of material from the ocean shore or a structure, appurtenance or other addition, modification or alteration constructed, placed or made on or to the land.

(2) “Ocean shore” means the land lying between extreme low tide of the Pacific Ocean and the statutory vegetation line as described by ORS 390.770 or the line of established upland shore vegetation, whichever is farther inland. “Ocean shore” does not include an estuary as defined in ORS 196.800.

390.610 Policy. (1) The Legislative Assembly hereby declares it is the public policy of the State of Oregon to forever preserve and maintain the sovereignty of the state heretofore legally existing over the ocean shore of the state from the Columbia River on the north to the Oregon-California line on the south so that the public may have the free and uninterrupted use thereof.

(2) The Legislative Assembly recognizes that over the years the public has made frequent and uninterrupted use of the ocean shore and recognizes, further, that where such use has been legally sufficient to create rights or easements in the public through dedication, prescription, grant or otherwise, that it is in the public interest to protect and preserve such public rights or easements as a permanent part of Oregon’s recreational resources.

(3) Accordingly, the Legislative Assembly hereby declares that all public rights or easements legally acquired in those lands described in subsection (2) of this section are confirmed and declared vested exclusively in the State of and shall be held and administered as state recreation areas.

390.615 Ownership of Pacific shore; declaration as state recreation area. Ownership of the shore of the Pacific Ocean between ordinary high tide and extreme low tide, and from the Oregon and Washington state line on the north to the Oregon and California state line on the south, excepting such portions as may have been disposed of by the state prior to July 5, 1947, is vested in the State of Oregon, and is declared to be a state recreation area. No portion of such ocean shore shall be alienated by any of the agencies of the state except as provided by law. [Formerly 274.070 and then 390.720]

390.620 Pacific shore not to be alienated; judicial confirmation. (1) No portion of the lands described by ORS 390.610 or any interest either therein now or hereafter acquired by the State of Oregon or any political subdivision thereof shall be alienated except as expressly provided by state law. The State Parks and Recreation Department and the State Land Board shall have concurrent jurisdiction to undertake appropriate court proceedings, when necessary, to protect, settle and confirm all such public rights and easements in the State of .

(2) No portion of the ocean shore declared a state recreation area by ORS 390.610 shall be alienated by any of the agencies of the state except as provided by law.

(3) In carrying out its duties under subsection (1) of this section with respect to lands and interests in land within the ocean shore, the State Land Board shall act with respect to the portion of the tidal submerged lands, as defined in ORS 274.705 (7), and the submersible lands, as defined in ORS 274.005 (8), that are situated within the ocean shore as it does with respect to other state-owned submerged and submersible lands within navigable waters of this state.

(1) The availability of other public lands in the vicinity for such recreational use or access.

(2) The land uses, improvements, and density of development in the vicinity.

(3) Existing public recreation areas and accesses in the vicinity.

Fantastic photo - though my first thought on seeing it was to wonder exactly who they were delivering the post to, as i was unaware that The Little Mermaid had a mailbox.

Then i read the history - which was where things got really interesting. Goes to show how little we know about our coastal areas

I love the folks who had the foresight to preserve our lands for generations to come......surprise, surprise......

But is makes me think of Big Sur :)

Can't you tell I've never been anywhere, because I always go back to that place, haha.

DFTP,
Glad you liked the photo and history. I got a kick out of your Little Mermaid joke :)

WW,
I love those folks too. I think you'll always go back to Big Sur even after you've traveled lots more. It's one of your places-of-the-heart, like Steens Mountain in eastern Oregon is for me.

every time I visit the coast, I am thankful that they had the foresight to preserve it so that we all could visit. It was great to read the history, thanks!

Elizabeth,
When I went to our vet for heartworm and flea meds for our dogs today I thought of you and Atlas, and sent healing thoughts your way.
Glad you enjoyed the history. May we forever commit to preserving this beautiful place....