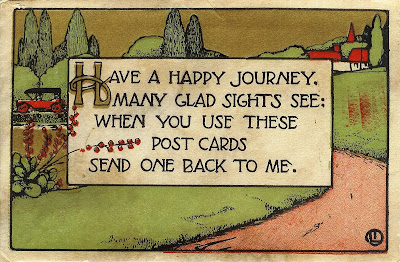 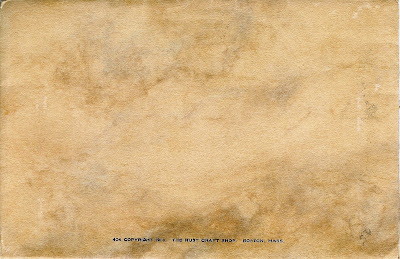 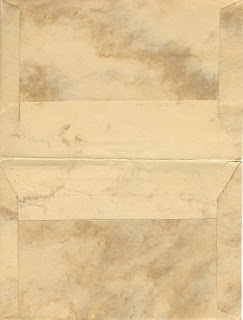 Evidently, it was not always the case that postcards from traveling friends were selected and mailed from the tourist site or destination place. In some cases, at least back in 1913, linen paper portfolios containing postcards were Bon voyage gifts given in anticipation of having a note written on one by the traveler and sent to the thoughtful friend at home.

This folder is empty, proof that its original purpose was realized. I wonder what kinds of images were printed on the postcards inside the folder, and how many there were. I wonder when it became clear to printers of such card folios that it was much more exciting to receive a postcard representing a place visited by a friend or family member than a generic art card. Perhaps these folders containing postcards were popular with people on cruises, so a card was there at the ready when the traveler thought to write a friend about a spectacular view or sumptuous meal or captivating novel or interesting new friends enjoyed while aboard ship.

Thanks to a blog titled Thoughts of Bibliomaven, I was able to learn more about the printer of this postcard folder, The Rust Craft Shop of Boston, Mass. In a post dated September 27, 2009, the author of the blog wrote:


Fred Rust opened his Book and Craft Shop in Kansas City in 1906. Along with his brother Donald (mining engineer by vocation) they produced various greetings cards, blotters, calendars and the like.

The Rusts' moved to Boston from Kansas City in 1913 opening the Rust Craft Company. Mainly in the greeting card business, this greeting card company evolved into one of the largest in the United States. After the move to Boston it produced greeting cards, puzzles, book marks, books, postcards, book plates, etc.

The Rust Craft Greeting Cards Inc. Company was purchased by Ziff Davis in 1979. The price which included the six television stations Russ Craft owned, was $89 million dollars. Of course the Rust family had long since sold out. . .

HAVE A HAPPY WEDNESDAY
ONE WITH SMILES AND NO LAMENTS;
PLEASE ENJOY THIS POST
FOR OPW -
I LOOK FORWARD TO YOUR COMMENTS.

How odd to select postcards for someone else to mail back to you! I don't suppose they contained photos of sights that the traveler was expected to see.

I like these old portfolios and have a few, although not as early as this one. The ones I found were of tourist destinations in the 30s and 40s. But, they were also printed on that linen like paper, and had candy-like saturated colors.

Remins me of the cycle tours I used to undertake as a boy. I collected post cards and wrote them before I went to post back to mum, telling her I was fine.

neat..it is good to look at old collections of these at times.
thanks for sharing.

Snowbrush~ I thought it odd too. Your idea is intriguing, especially when considering why such cards would exist away from, and not in, a given specific site...(see mythopolis' comment below yours).

mythopolis~ (see Snowbrush' comment) You may have solved a mystery by telling us about the ones you have.

Dave King~ What a fun boyhood remembrance. I bet your mother absolutely loved those cards from you. Special.

Jingle~ My pleasure...thanks for viewing. :)

the other week i bought myself a book - The Second Book of General Ignorance. It's based on a TV series called QI (Quite Interesting) that takes facts that you think you know and shows that they may not be true (the answers on the show are said to be "if not right, then at least interesting"

Anyway - the book had a section on postcards and i thought you'd be interested in some of the information:

Pixies~ How fascinating! The information you shared explains why so many of the oldest postcards I have were printed in Germany. Their quality was really special. So when the war came that entire industry suffered there...that is a little-known war fact!
The tv show sounds like a good one. Maybe it will find its way over here in an American version, like so many have.
Thanks much for taking the time to share this. xo

Also, the quality of the cards went to hell. The German cards had been printed on good stock with good ink, whereas the cards that succeeded them were called "linen cards" because they were on paper that wasn't smooth but which would hold the cheaper inks.

Snowbrush~ Thank you for still more background on why we see a difference in the quality of postcards printed early on in Germany as opposed to those that came later. Linen, hah.

As a fan of your postcard-filled blog, I'm also an admirer of your taking viewers along with related history. Now you have sent me to look through my own collection...lovely trip, thank you.

I have posted two layouts of postcard portfolios with photos, one of the 1937 Pan American Exposition in Texas, the other of scenic New Mexico. These can be viewed if you are interested at one of my other sites: yesterdaysmyth.blogspot.com

PS: I meant San Antonio, not New Mx, although I will post a New Mx portfolio in the near future. You may have to scroll a bit to locate these, but that site is mostly of old photos, cards, and such, so maybe you will enjoy looking about. yesterdaysmyth.blogspot.com

fascinated! and i am also in love with the texture and lovely delicate hues of brown of this old paper, it must give you such a feeling to hold it and gently pass your finger upon it, no?

naomi~ How exciting, and I will be right over to view your postcard. I am so glad you decided to share your postcards!

mythopolis~ The same thing I just wrote to naomi basically counts for you, too, although you have obviously been posting postcards for awhile. I will enjoy my tour!

Roxana~ Yes! The tactile experience is a part of the joy of having these old postcards. And you are right that this one feels especially softened by nearly 100 years.

Hmm. Maybe I'll look through my collection, too, tho it is not very extensive.

Hattie~ It need not be extensive to contain interesting gems!

Re: Postcard Wednesday. What a great idea! It makes me want to search for my own collection from the attic, or wherever it's hiding out. I, too, have a postcard section on my blog, but it's made up of photos I've taken, usually at the change of seasons.
Love your dream image of sitting on the bottom of Lake Tahoe watching the swimmers above, but hope you never try it when you're awake!
This is my first trip to your interesting site, however we obviously have crossed paths on the cyber highway. Will return.

paula~ So happy to have you visit and really enjoyed your comments. I am replying after having spent a bit of time over at your blog and truly enjoyed myself!

Was given a The Wonder Bubble Blower in the original box with a boy and girl with the bubble blower made with wood and metal. never used. on the vintage box made RUST CRADR BOSTON
Has anyone seen this before?
Vanessa