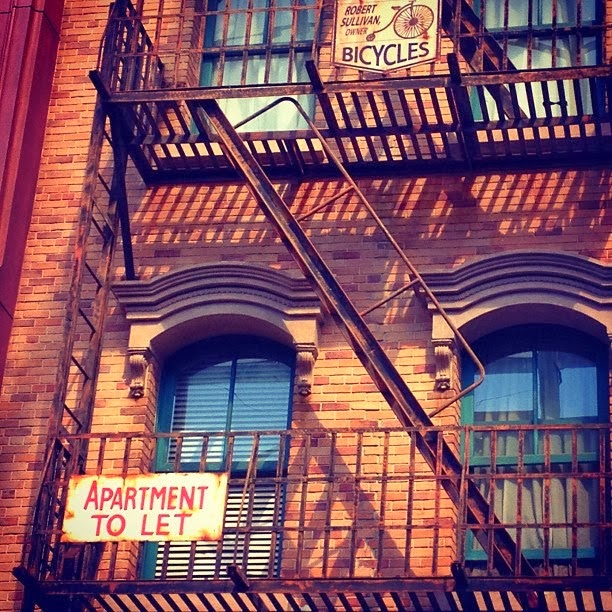 They lived there young in the old building. The sun was old but seemed new then too. It clearly knew the morning, dearly warmed the day, nearly broke their hearts while surrendering to gloaming. The building was made of brick and the walls were thick enough to work with the steam heater that stood under the window by the rusting balcony. Single window panes smelled lightly of vinegar but never quite gave up their dried specks of turquoise paint along the borders. The couple could smell neighbors' meals up and down the street: cabbage and pork and rich sauces and fried potatoes and curry and meatloaf and baked desserts, and they heard the chorus of those daily lives like sounds on the wing. In summer, during heatwaves, thin mattresses covered the balconies and excited children climbed fire escapes and swore they would not sleep but the cool of the night won, and dreams went deep. Once, when they lived there young in the old building and lounged atop a mattress on the rusting balcony in a moonlit heatwave, they locked in passion and went deep in the cool of night and escaped to a dreamworld as hot as the sun.


Written for The Mag: Mag 207 that inspired with the above image prompt
(Universal Studios Lot, Instagram by sessepien).
.

the bittersweet part of this is that it all feels like it is in the past....

there in the brick on the mattress sounds like a warm place to be...smiles.

Reminds me of places I lived when I was young. Lovely image, Lydia.

I remember living there young in an old brick building with thick walls. Two students, with part-time jobs, and lots of classes. We survived. In fact, we're still together (about 45 years later).

The poem captures the feeling, the ambience, the reality.

Those were interesting days all right.

Gday Lydia, you have generated a ehole macroccosm inside this microcosm , and thanks for bringing it to life for us all, cheers mate

Reminds one of the excitement of adjusting to the vagaries of the weather. Each finds his own way to make himself comfortable! And it is refreshing to have a prose from the usual poems. Wonderful write Lydia!

a sweet romantic glimpse into someones past.....

Oh, I love this and also your Friday Flash 55

Oh my good god, Lydia, this is magnificent. You 've aced every sense. My favorite piece of yours ever.

This reminded me of Hitchcock's Rear Window...nice!

Makes me remember being young in an old building. Not in an unpleasant way. . . .. but holistically, as in the circle of life.
Blessings from Dalamory
www.freda.org.uk

Nice! Like the photo with the old sign. Your words speak of a world most of us do not know. One of city and bits of ethnic folks living in those sweltering places before AC. -- barbara